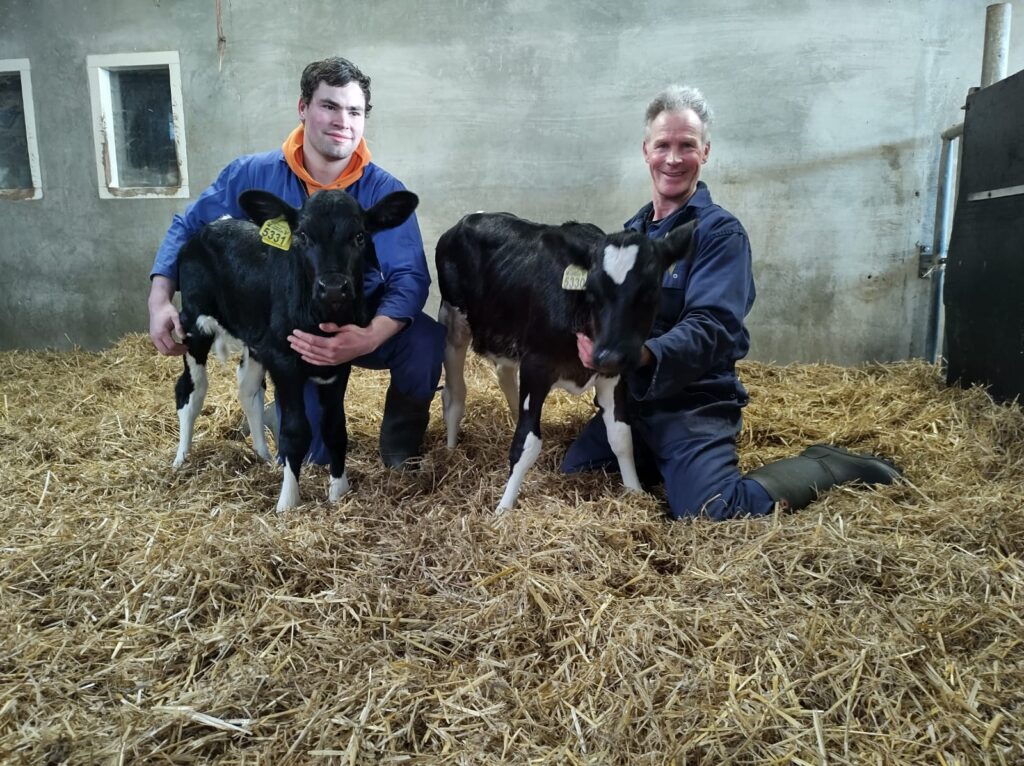 Arie started systematically breeding using the aAa tool some 23 years ago. The aAa system is built on experiences in practice and views cows from a practical perspective. The relationship between the parts of a cow is a key component of the aAa breeding tool. The balance has to be right to breed functional animals. “I keep one or two bulls on the farm every year. Meester caught my eye immediately”, Arie begins his story.

“He started developing very fast when he was around a year old. Analysis soon indicated code 561. As he continued to develop, the more progress and activity he showed. He truly is a Lord and Master in rounded traits,” says Arie proudly. He adds: “But actually, code 1 is also important. The will to milk and a good appetite for feed. These factors are not considered in the current genomic-based breeding approach.”

A good bull must be balanced and athletically built

“Since I started breeding using the triple A concept, I look at the physical attributes of cows more consciously”, Arie continues. “It seems simple, but the longer you breed based on this method, the more complicated you realise the system is.” When asked what makes a good bull, father and son exclaim in unison: “He must be black.”

It would be great if all cows were black, but quality reigns supreme above colour, Arie laughs. “A good bull must also be balanced and athletically built, the thurl must be centrally positioned in the rump, he must have a perfectly straight back and compact claws.”

Meester contributes balance to the herd

Meester descends from a line of reliable and influential bulls so he represents high added value for the farmer. Arie and Gerwin agree in this respect. “Meester is very similar to his sire”, confirms Gerwin. “He can contribute balance to the herd. You can see this reflected in the Malki daughters. We currently have 27 of them in lactation. They are well balanced, alert cows. A cow that has more balanced traits can realise her genetic potential more easily and will therefore perform better.”

Meester’s maternal line is also notable. Solid, later maturing and durable are words that perfectly sum up the qualities of his maternal line. “The Annas have been a presence on our farm for a long time,” Arie explains. “But they didn’t really make an impression as young animals.” But as Meester’s dam began to mature, she started to stand out.

In 2019, De Nautena Anna 121 (VG 87) was voted the best dairy cow in the oldest category at the Flevoland show. The outstanding traits of this Bertil daughter are her excellent frame and type, her sky-high component percentages and persistency. Gerwin: “In the meantime, she has produced more than 110,000 kg of milk, noting an average lactation value of 117. Age has not compromised the qualities of the now 11-year-old cow. She hardly changes as she grows older.”

Meester’s dam has reached a respectable age, and so has his sire Malki – who is 10 years old. “What I appreciate about K.I. SAMEN is that they use a bull from an older generation. They value the quality of a bull more highly than a quick generation interval. Malki’s qualities are reflected in Meester”, says Arie. “In fact, Meester descends from a cow born in 2011 who produced 100,000 kg of milk and has a grand dam born in 2005,” he laughs.

Attention for the older cows is something Arie considers very important. In 2012 he expanded the barn by adding a dedicated senior section which offers more space for the cows, has wider cubicles and eating places, spacious walkways and good climate control. “There are many advantages in separating the older cows,” says Arie. “The atmosphere in the group of younger cows is now calmer and their production has seen a positive boost. When the older cows were separated from the group, you see the lactation value rise by 1 to 2 points. So it’s a win-win situation,” concludes Arie.

Johan van Houwelingen, the breeding technical who advises farmers in the Flevoland region, believes Meester is an ideal bull to transmit balance to the herd. Meester brings chest width and adds power to the hind quarters and has correct legs and claws. He is the type of bull who gives daughters with a natural will to produce milk and the ability to intake plenty of forage. Meester is an ideal match with cows who lack width and have become too tall.